Teddy bear Philip was sewn as an experiment on various materials. This time I chose curly viscose of unusual color and texture. Bear sewn on an unusual pattern with combined inserts on the muzzle, front and hind legs. To fasten the head and limbs, densely packed with small sawdust, 5 cotter pins were used. Eyes are black glass. The nose is embroidered with black threads of a mouline. 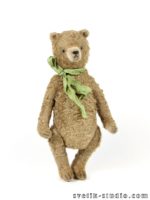 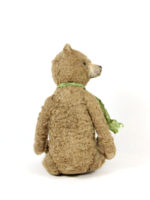 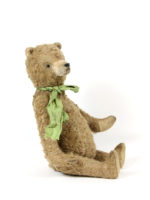 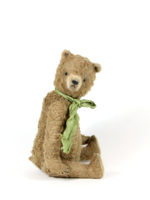 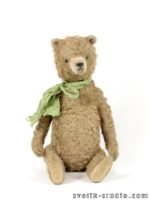 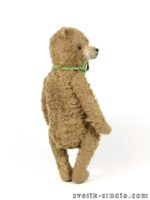 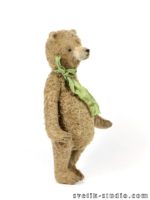 At first, I planned to leave only a silk bow on Philip. But then I wanted to put him in a shirt, shorts and a vest. The steering wheel icon was sewn to the right pocket of the shorts. I also sewn leather shoes with laces for him. The green silk bow remained on the bear, but now it harmoniously complemented the entire ensemble of the little dandy.

After the Teddy bear Philip was ready, I noticed that his look reminds me of the character of the feature film Les Choristes (2004) – Pépinot. And despite the fact that everyone liked him very much, for a long time no one took Teddy bear Philip. Only two years later he found his home. By strange chance, he was taken on Saturday.