We moved out of Berlin is not very early, we had to drive the last section, so we are not in a hurry. True, driving quite a bit ahead found a big traffic jam. Navigator took us to a detour, we agreed. Our path passed through picturesque German villages. Around it smelled wonderfully, birds were chirping and insects were buzzing.
Half an hour later we arrived at the Elbe River and found that it was only possible to move to the other side on the ferry. Waiting for the return of the ferry to our shore, we drove onto the ferry deck and paid a fare of 5 euros. While the floating transport transported us through a hundred-meter barrier, we admired the surrounding views. So we drove around the traffic jam. I doubt that we won by time, but we certainly did not lose, and we enjoyed it immensely.
Then the road went as usual – in the far right lane of the car drive 120 kmph, and in the left no restrictions. In order not to get lost in the traffic, we had to go «hair back».
When we arrived in Münster, my knees were shaking. It was already dark and it was raining. Arriving at the hotel «Haus Niemann», we parked in a private parking lot. We were met by a pleasant woman – the hotel manager, she told everything and showed. Then we went to rest. 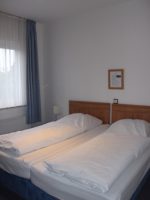