The second day of the exhibition Hello Teddy 2018 started for me exciting. I had high hopes for contest and prepared 2 more works. Retro teddy bear Timka in the nomination «Retro» and the village beauty teddy bear Manya in the nomination «Fashion». The announcement of the winners will be held in the evening, so I concentrated on the stand.

Visitors walked in an endless stream. Many people stopped to see my works and buy a friend. The pre-Christmas mood reigned in the hall, everyone eagerly awaited the New Year holidays. Visitors happy left the exhibition, and I was still waiting for a dinner party, which will announce the winners of the competition.

The award ceremony, as always, was held in a festive atmosphere. There were many very talented craftsmen. Awards were given in 12 nominations. My teddy bear Timka could not stand the competition, could not win in the nomination «Retro». But I won the nomination «Fashion». This is my third participation in this nomination, so I took into account all my mistakes and deservedly won, having bypassed in the competition of eminent masters. The prize went to teddy bear Manya, as the most stylish and fashionable bear, dressed in the folk Russian style.

The jury members separately noted that I was able to achieve what they expected from the participants in the nomination «Fashion» – to show the elaboration, detailing of the costume and accessories. In my work, the stylization of the Russian folk costume was shown, the character of those Russian women who, even going for water to the well, would dress up and adorn themselves.

I am extremely happy with my reward. It will occupy an honorable place on my list of awards, as this is my first rather serious achievement. I will definitely move on and try to get many other awards. For me, these awards are an indicator of my professional growth. In my work I want to achieve the maximum result. 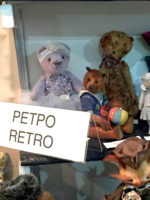 Teddy bear Manya stands with a rocker and buckets 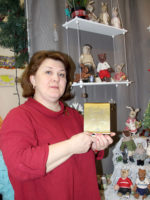 I’m with my reward 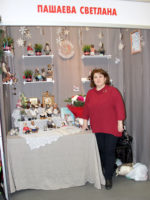